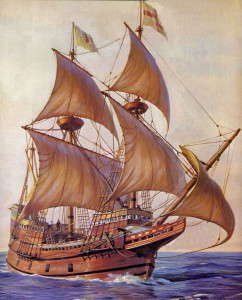 This is an interesting and informative two hour walking tour of the old town of Southampton visiting places and locations which would have been recognised by the Pilgrim Fathers and the settler passengers before they embarked for the New World on the Mayflower and the Speedwell.

The Settlers and Pilgrims arrived at Southampton in July 1620 where they provisioned both ships during the two weeks they were waiting for repairs to the Speedwell to be completed.

This tour commences from the iconic BARGATE at 11.15 AM on the dates which coincide with visits of Cunard’s Transatlantic QM2.

The Tour is in three Stages:

Stage One: A walk describing Southampton in C 1620 including the religious organisation, influence of James 1st (6th of Scotland) with regard to religious tolerance and national unification, facilities for provisioning MAYFLOWER and Speedwell for the arduous transatlantic adventure, activities of merchants, population including prominent local figures and life in general for early 17th Century Sotonians and visitors.

Stage Two: For this stage we visit a Tudor House that was already a hundred years old when the Pilgrims arrived in Southampton and hence would have been familiar to them This visit includes a short presentation on the history of the Pilgrim Fathers and an update on the building of MAYFLOWER OF HARWICH.  This replica ship will be visiting Southampton leading up to the 400th anniversary in 2020 of the sailing of the Mayflower and Speedwell from Southampton.

Stage Three: The final 45 minutes includes a visit to the location of the departure of the Mayflower and the monument to the Pilgrim Fathers unveiled in 1913.

The total time of the tour is 2 hours.

The total cost  of the tour is £8.00 per person which is made up of £5 for the tour and a £3.00 donation to the Harwich Mayflower project.

Concessions 20% of the £5.00 walk cost but the £3.00 donation donation to the Harwich Mayflower project still applies.

For children aged 14 and under the tour is free but the £3.00 donation donation to the Harwich Mayflower project still applies.